Smashing and bashing their way to victory 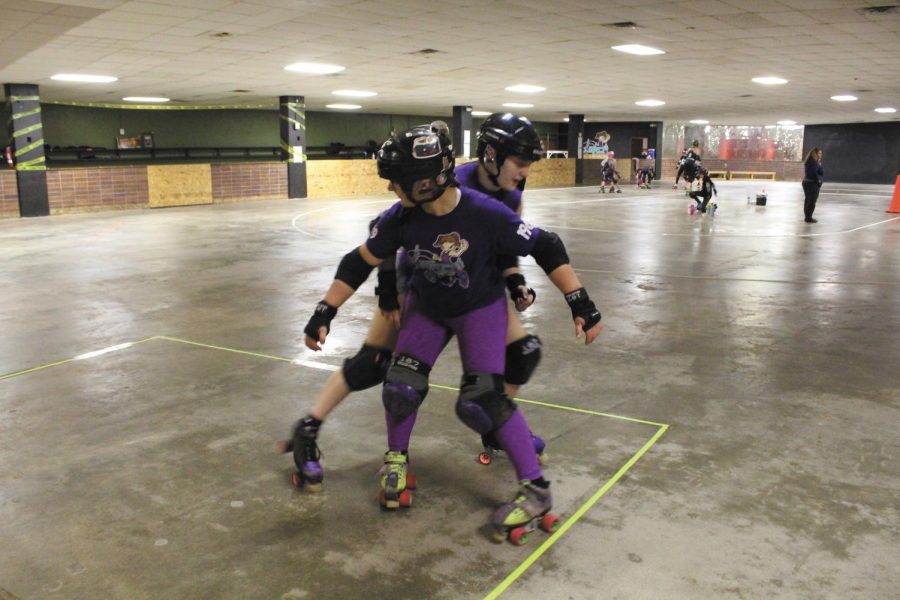 Freshman Caroline Boucher blocks senior Trinity Hettinger from trying to get around her and score a point. “I’ve always loved skating and thought it looked like a great way to take my anger out,” Hettinger said. Photo by McKenzie Gandy.

Knee pads up, skates on, and helmets buckled, the young women of Omaha Junior Roller Derby (OJRD) began their race around the track.

Coach Emma Hauenstein, who’s derby name is Elle on Wheels, manages the league of 30 players ranging from 8 to 17 years old. According to their website, the league is co-ed, skater owned and operated, and volunteer ran. It is also part of the adult league, the Omaha Roller Girl and is non profit, with any money going back to the program.

Hauenstein started coaching the junior roller derby team last August. She played roller derby with OJRD for all four years of high school and during that time, she skated as a blocker and jammer. She said blocking was her favorite position.

“The mission of OJRD is to establish a program that will help develop character, confidence, leadership, and provide a positive social interaction in youths through sports,” Hauenstein said. “Our goal is to nurture and develop both skilled athletes and those who have not yet realized the champion inside them.”

Senior Trinity Hettinger, Toxic, and freshman Caroline Boucher, Sour Caroline, started roller derby six years ago. As a captain, Hettinger uses roller derby to release inner anger and said the sport taught her to be a better teammate and player. Boucher  said she wanted to play at 4 years old, ever since she saw her mom skate.

“The first thing I said to my coach when I first joined was actually I have waited four years for this day,” Boucher said.

Boucher said she adores roller derby and for people interested, the skill of skating is not needed as that is taught in a boot camp that she helps with, which is a mini session where they teach the basics of skating, falling, and hitting.

“I would like people to know that it is not a violent sport,” Boucher said. “People hear hitting and assume we punch each other or push each other on skates. While we do hit, they are safe hits and the game is mostly fun and a bit of strategy. You do not need to be strong in order to be a good derby player.”

Breaking down game play, Hauenstein said roller derby is a team skating sport on a flat track. The game itself starts with two teams consisting of five players per team, four blockers and one jammer. She said both team’s blockers are required to stay within ten feet of each other, forming a pack.

“The point of the game is to out score the opposing team,” Hauenstein said. “This is done by jammers skating through the other team’s blockers. Jammers score one point for each opposing blocker they pass. The jammers try to get as many points as possible in one jam, the game consists of two 30-minute periods.”

Hettinger and Boucher share a love for the sport. From very young, they took an interest in roller derby and stuck with it.

“Roller derby is a tough but amazingly fun sport,” Hettinger said. “Whether you’re competitive or not it’s fun to knock your friends on their butts.”