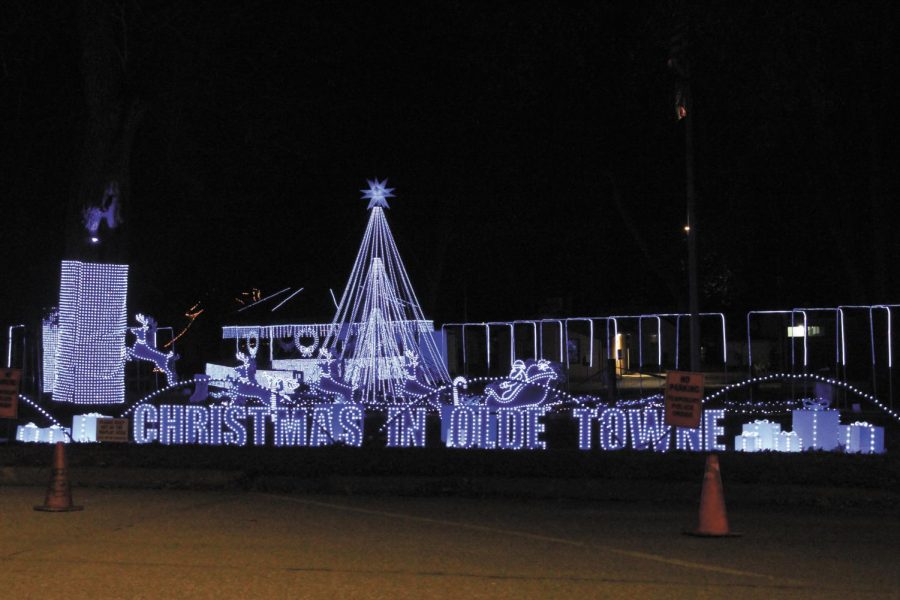 In Old Towne Bellevue at Washington Park, Christmas lights are displayed for the winter season to share the cheerful spirit. Photo by McKenzie Gandy

The darkness of the park suddenly lights up as a host of colorfully decorated Christmas lights shine a display of many Christmas themes. Christmas trees, reindeer, and the words “Christmas in Olde Towne” light up the area. These lights are all part of a group of people committed to “Light Up Bellevue.”

The group has been in the works for quite a while, but has just recently made its appearance. Joanna Hike, BPS teacher  and wife of Mayor Rusty Hike, enjoys giving back to the community. After seeing the need for some holiday cheer she gathered a committee.

“I noticed that all the other cities were doing something for the holidays and wanted Bellevue to join in on the holiday festivities. I came up with the idea about a year and a half ago. The committee has been working on this project and fundraising since last January,” Hike said.

When people first began talking about it, no one thought anything was actually going to happen. The Hike family created a website and started looking for volunteers.

“The inspiration came from a Facebook page where residents were complaining of the lights in the Olde Towne area saying they were not like they used to be. I joined the conversation saying that I would be interested in helping to change that,” Light Up Bellevue committee member Mike Poth said.

Currently there are three main light displays. There is a light show on display throughout Washington park, lights at the police station, and a tree outside the Lied Activity Center. Next year the group plans to put lights on the light poles that are along Mission Ave.

“I  love to look at Christmas lights; I think they are really pretty and artistic. I am happy to see that they finally have a local light show, before we usually drove to Omaha to see them,” sophomore Damaya Calip said.

The light display at Washington Park has over 16,000 lights hat synced to music. Mondays, Tuesdays and Wednesdays from 5 to 6 p.m. the lights will stay one color and will not flash, so that people with disabilities can view the display.

“The messages and colors will change with the seasons, holidays, and events. The mega tree is down right now due to strong winds, but it is in the process of being rebuilt and it will be stronger so it will be able to withstand the strong winds,” Hike said.