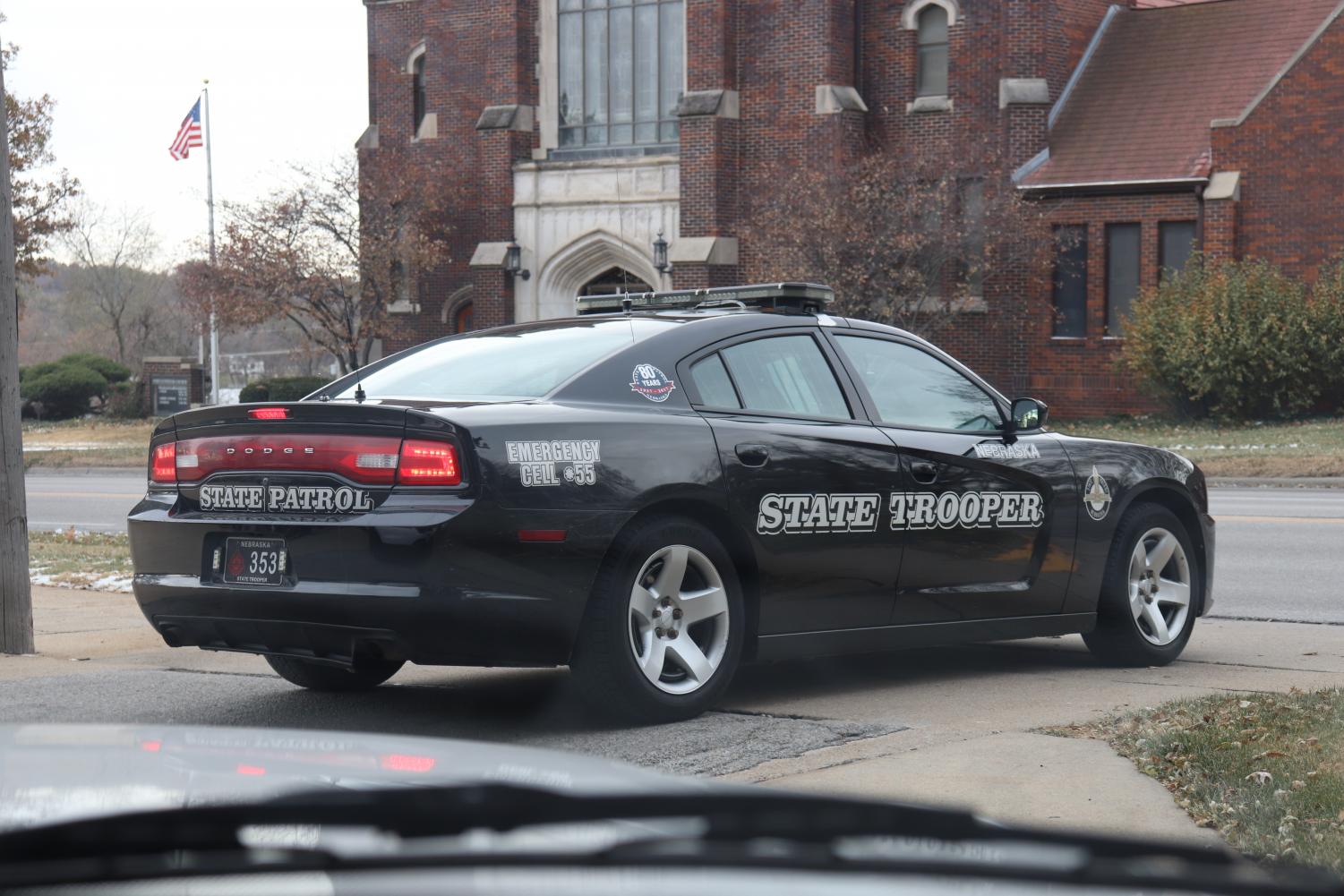 State troopers wait for a description of a driver who committed a violation while doing an enforcement operation. “Our goal is to reduce crashes. Period. Save lives, at the end of the day, that’s the goal. Sarpy County has had a very bad year this year. There’s a lot of reasons for that,” Bellevue Police Sgt. Larry Lampman said. (Silas Chisam)

State troopers wait for a description of a driver who committed a violation while doing an enforcement operation. “Our goal is to reduce crashes. Period. Save lives, at the end of the day, that’s the goal. Sarpy County has had a very bad year this year. There’s a lot of reasons for that,” Bellevue Police Sgt. Larry Lampman said.

The Bellevue Police Department, in conjunction with other local Sarpy County police departments, the Sarpy County Sheriff’s Office, and the Nebraska State Patrol started a task force in September of 2019 in response to the recent rise in fatalities.

An increasing amount of drivers have been hitting the roads in Sarpy County with Sarpy County having the fastest population growth rate in the entire state of Nebraska.

“We are doubling and tripling other areas of the state with population growth,” Bellevue Police Sgt. Larry Lampman said. “With that comes the cars that go with it. More schools, more cars, more young drivers, and unfortunately more bad crashes.”

The Sarpy County Traffic Safety Task Force is made up of several different law enforcement agencies within Sarpy County all working toward a common goal.

“This is a combined effort among five agencies including, the Nebraska State Patrol, Bellevue Police, Papillion Police, La Vista Police, and the Sarpy County Sheriff’s Office,” Lampman said. “This is something that we do year round. This is now just a focused effort. Bellevue Police work for Sarpy County on a daily basis, and the State Patrol, as well Papillion and La Vista.”

This is not the first time that a task force similar to the Sarpy County Traffic Safety Task Force has been active. Task forces similar to the current task force have seen great results from their activity and positive community engagment.

“There was a task force like this back in 2000 that I was a part of, and it reduced crashes. In the late 2000s, 2008-2012, there was a Sarpy County task force, there was a grant paid, during that time the accidents reduced. Obviously with enforcement, people slow down, people stop at the lights, so they decided they were going to do this again,” Lampman said.

Rises in fatalities and traffic accidents are the main reason this task force has been formed, in hope for similar results to previous years when they ran operations.

“The task force began with the Chiefs and the Sheriff in Sarpy County along with the Colonel of the State Patrol. They realized that we had a growing population and a growing number of fatalities in the county,” Lampman said. “The Chiefs came back to the Supervisors of the traffic units and asked our opinions. At that point all the agency Supervisors met, came up with a gameplan, and came up with the dates, and here we are today.”

Even with all of the different officers from all over the county, the task force is able to work efficiently with the help of a memorandum of understanding between all of the  Sarpy County law enforcement agencies.

“There is a memorandum of understanding, an MOU, that was in place since I’ve been a police officer, that we have the authority to stop and make an arrest anywhere in Sarpy County,” Lampman said.

All of these agencies are working toward one common goal and hope to educate the public by doing these types of enforcements.

A day for the task force is filled with activity. In one day they stopped 76 cars all across Sarpy County with charges ranging from speeding to possession of marijuana.

Sarpy County’s Traffic Safety Task Force is still in the beginning stages so it is unknown whether or not the task force has impacted the overall number of fatalities, but the members of the force still have high hopes.

“It is too early to tell whether our efforts have affected crash numbers, however, our presence is well known through media campaigns and social media, so the word getting out will hopefully cause drivers to take pause before committing traffic infractions,” Sarpy County Sheriff Sgt. Percifield said.

The task force has a very public presence by tweeting out their locations, violations they will be enforcing and then their results at the end.

“Overall, the response has been positive.  We have had many citizens reach out thanking us for our efforts and even suggesting new spots to conduct traffic enforcement,” Percifield said.

Future enforcement efforts are already being discussed with a potential grant from the Nebraska Highway Safety Office to continue these types of operations.

“It sounds like the state Highway Safety has awarded us a small grant to start. So we’ll put together the same operation. Usually 2 officers per agency and plan dates for 2020, and continue running this, I foresee, two times a month,” Lampman said. “It sounds like there is potential for more grant money available so it could continue the following year and could be more than two per month.”